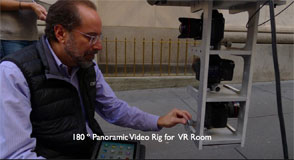 In many ways I have the greatest job in the world.

I spend my days searching for wonder and amazement in our world and pioneering innovative ways to leverage them to enhance and enrich communication and storytelling.

I’m privileged to work and collaborate with amazing and brilliant talents around the world: visionaries, artists, futurists, designers, directors, inventors, thought leaders, scientists, engineers and technologists around the world.

Since an early age I’ve been fascinated with the wonder of image making. I still remember the moment of magic when at 9 years old I developed my first photograph in a day camp darkroom.   (Show pic) . I’ve been enamored with looking more closely at our world and have been creating images ever since.

It wasn’t much of a leap to begin exploring painting with light, filmmaking and frame-by-frame animation. But the event that really changed my life and helped me define my life’s goals was experiencing the 1964 New York Worlds Fair.

Growing up in Brooklyn (before it was cool) allowed me to attend the Worlds Fair almost weekly. Talk about being WOW’d. Wonder was everywhere: Turbine cars, Hover-Craft, touchtone phones, picture-phones, robots, computers, and the General Motors Futurama 2 ride depicted an amazing vision of the future complete with a colonized moon and undersea cities.

Mindboggling architecture and futuristic design was everywhere. But the seminal moment for one and me that would inspire me for life was the IBM Pavilion and within it, Charles and Ray Eames’ amazing 22-screen multimedia experience called THINK. 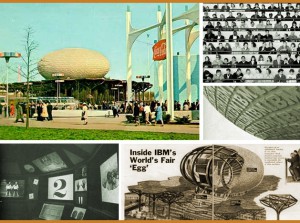 The audience entered a steep grandstand known as the “People Wall.” After 500 people were seated, the entire wall, guided by tracks rose upwards and smoothly into the egg-shaped theater, while a narrator appeared, suspended in space before them on a small circular platform.

The show, a 22 screen, 12 minute true multi-media experience multiple slide and movie projectors, special lighting effects, and advanced stereophonic sound to demonstrate how the human mind (itself a computer) solved problems. The screens of various shapes and sizes surrounded the audience and information bombarded them from various directions. The screen, front and center, showed all a person’s brain interpreted information from its senses (represented by the peripheral screens) and acted upon them. To an audience that had never encountered anything like this presentation, it was mind-blowing.

It was magic. It was wonder. I was WOW’d for life and knew I wanted to share the childlike joy of truly being amazed and WOW’d with others.